Alphatag, the new hardware and software platform from LASERWAR, is a laser tag game-changer. This is the 11th generation of laser tag equipment. Its implementation incorporates principles and solutions that greatly enhance the player’s capabilities. Wireless stats are no surprise to anyone these days. But what about the ability to quickly connect and fully interact with a real player’s headband, up to 7 weapons, game devices or smartphones? What about using special devices for role-playing characters – medic, engineer, sapper, and hacker?

The removal of the technical limitations inherent in previous laser tag generations opens up new horizons for the development of the game that many people love, as well as business projects of hybrid laser tag arenas. Even greater player integration into the game arena world with the ability to boost your character and global world statistics, full control of arena equipment and the game process via control software, and much more, which will define the development of laser tag in the upcoming years.

The success of any laser tag club is largely determined by the reliability and return on investment of its game arsenal. And this is where the “Unique” class weapon models take the lead by a huge margin.

“Unique” taggers are weapons developed at the LASERWAR design office. These are lightweight, robust and reliable models proven by thousands of laser tag clubs around the world. The optical system, Bluetooth modules and weapon bodies are certified to GOST R, GOST ISO 9001-2015 and comply with CE standards. Designed to meet the demands of harsh rental conditions, the taggers have enhanced body strength, proven reliability and high return on investment. These are the workhorses of many laser tag clubs. They endure the hardest rental challenges.

Over the last year we have seriously expanded our range of unique taggers, and today we offer a full range of weapons from pistols to sniper rifles and machine guns on the Alpha platform.

The equipment is supplied by default with Prism optics (350 m range), optionally with Parallax optics (up to 600 m range). The first option is suitable for rental clubs focusing on kids, women, corporate events and parties, while the second one is suitable for professional clubs, experienced players and laser tag athletes.

LASERWAR’s top-of-the-line AR-15 Ranger, a worthy adversary to the Kalashnikov assault rifle. In designing the body of the new rifle, our aim was to create a recognizable weapon. The recognizable features of the AR-15 are implemented in the corporate style of LASERWAR. Every element of the game set is thought out to the last detail.

The multiple Picatinny rails, lever-operated fire mode switch, bolt reloading, precision optics and a dozen other advantages we’ve packed this product with are now enhanced by 11th generation electronics capabilities. This model will be of equal interest to young and experienced players alike.

The introduction of the AR-15 assault rifle marked the beginning of a whole range of equipment based on the new body. SR-21 Ghost, a lightweight sniper rifle, has a familiar AR-type silhouette, shortened magazine, outer tube with Prism or Parallax optics, bipod or tactical grip and a sniper sight.

The lightweight and compact model is sure to be popular with young players.

Another product in this range is the Berserk light handgun. An external gun tube, high-capacity magazine, bipod and collimator are this model’s distinguished features. 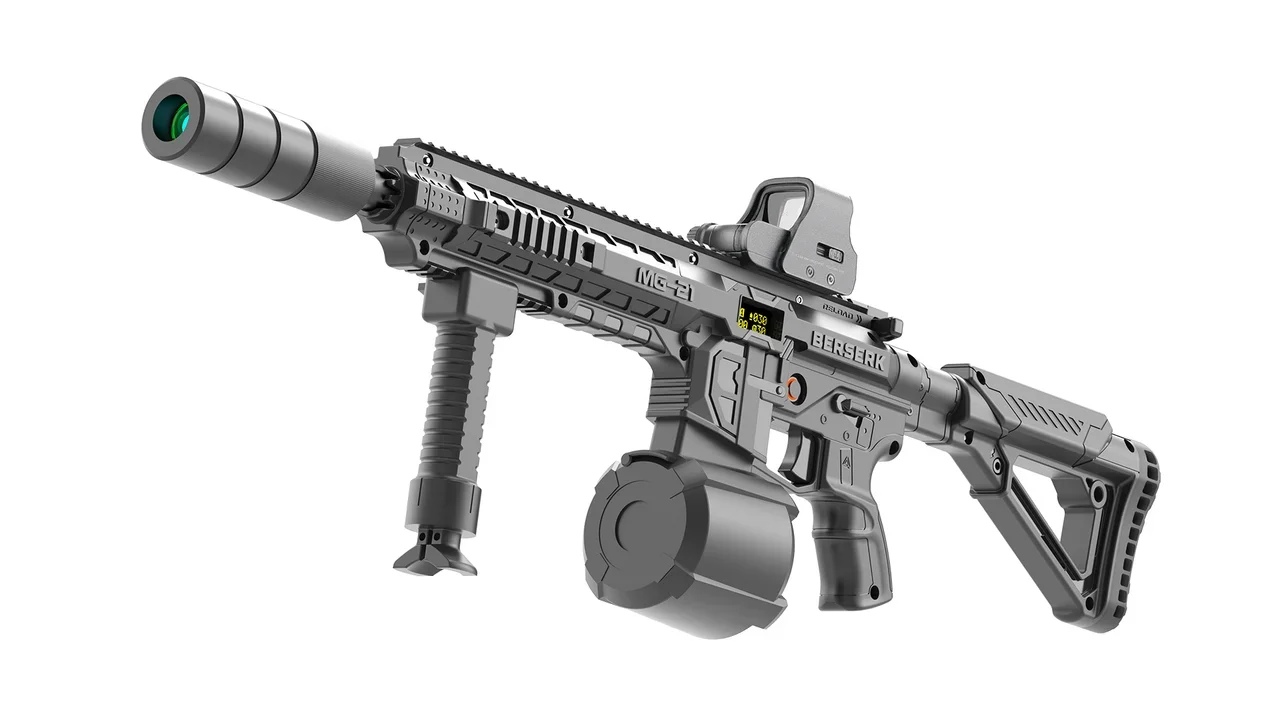 When on sale, the ‘unique’ range of models can be called complete. Such an arsenal, designed specifically for rental conditions, will satisfy all tastes.

A worthy adversary of the AR-15, the successor of the home gun school, the AK-15 Warrior was created as a continuation of the AK-12 Predator – a rental clubs’ leader. The game set has an improved design, new tactical grip, bolt reloading, fire mode controls and Parallax optics – these are the features that set it apart from its predecessor. 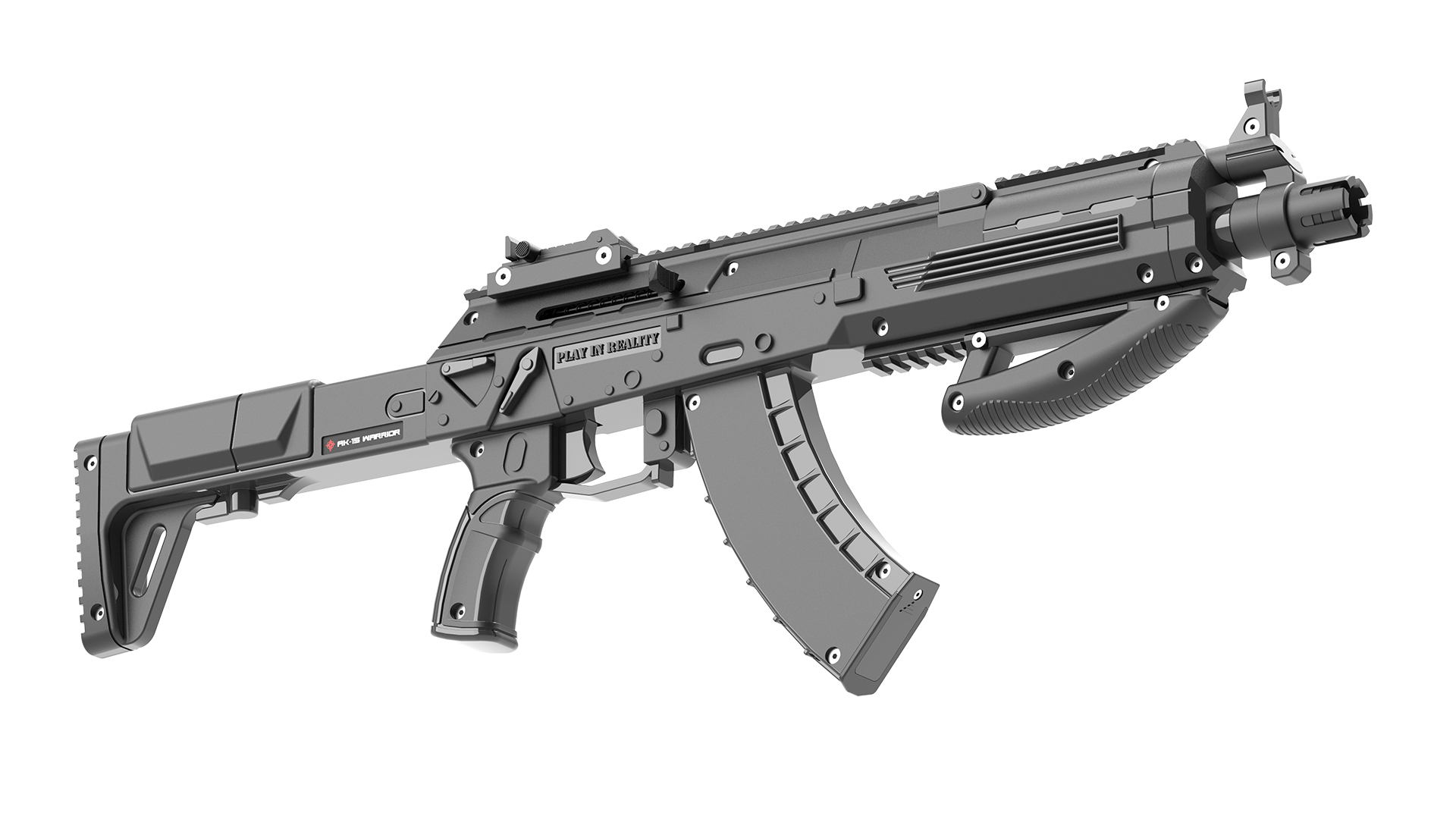 The model is popular with kids and adults alike, and the Parallax’s high accuracy and long range optics make it a formidable weapon.

The classic laser tag rental weapon – AK-12LT Predator – has become the hallmark and history of LASERWAR. For several years, we looked for a model to lead the LASERWAR range of in-house designed equipment. And we ended up with the AK-12 from the Kalashnikov concern. Engineers redesigned the body to make a laser tag assault rifle, developed a mould and started manufacturing in-house bodies. The AK-12 was the first tagger that LASERWAR technicians manufactured entirely in-house. And today it is the flagship product on the equipment market for outdoor laser tag. 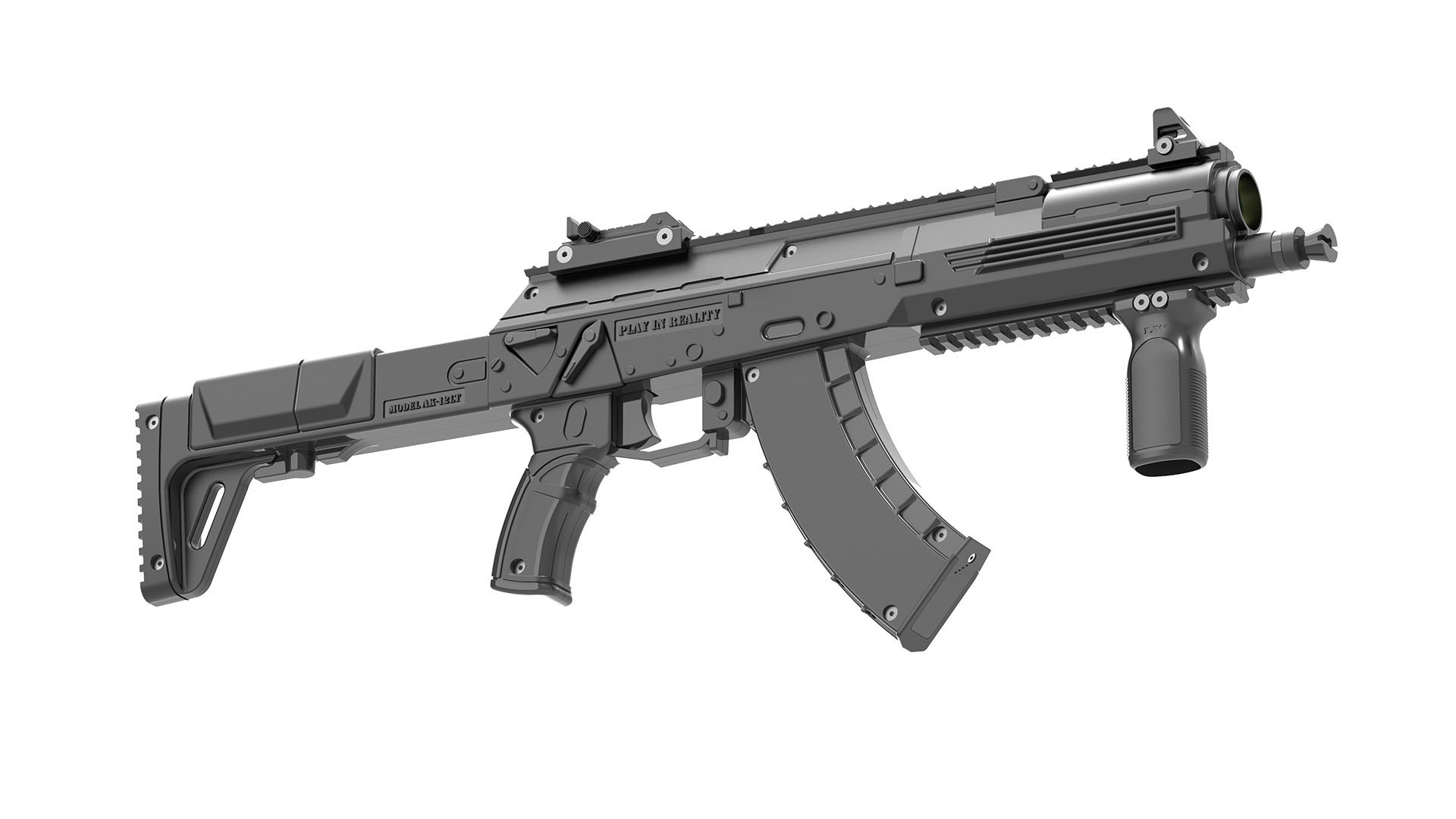 The AK-12LT SPORT is the basic weapon for sporting laser tag competitions. The model has proven to be a great rental solution. Many players started their laser tag journey with it.

Another example of a timeless classic from LASERWAR is the Phoenix submachine gun. Its low weight and compact dimensions have made it insanely popular with young players. This model was also developed entirely by the company’s designers and is so successful that it has never been upgraded. 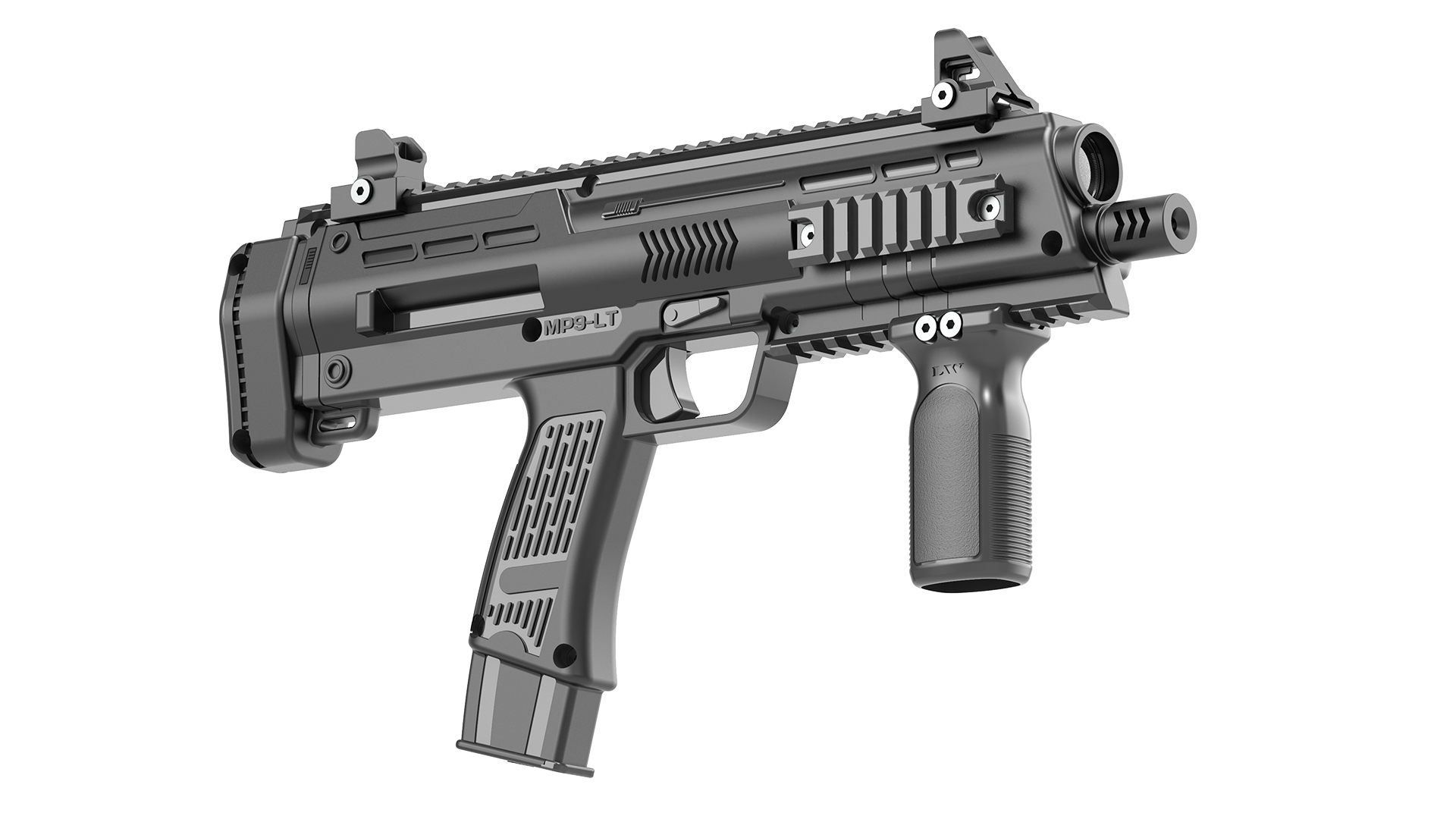 The Phoenix is available with built-in Prism optics.

The Hornet would fit nicely into a sniper’s or assaulter’s arsenal as a second weapon. Its high combat accuracy even makes it possible to hold pistol tournaments where it would be the primary means of fight.

When creating the Hornet, we took into account the wishes of all players – those who need additional rails for sights, and those who prefer to play without any. The pistol comes with two bolts: with/without a Picatinny rail. Which one to use in the game is up to you to decide. 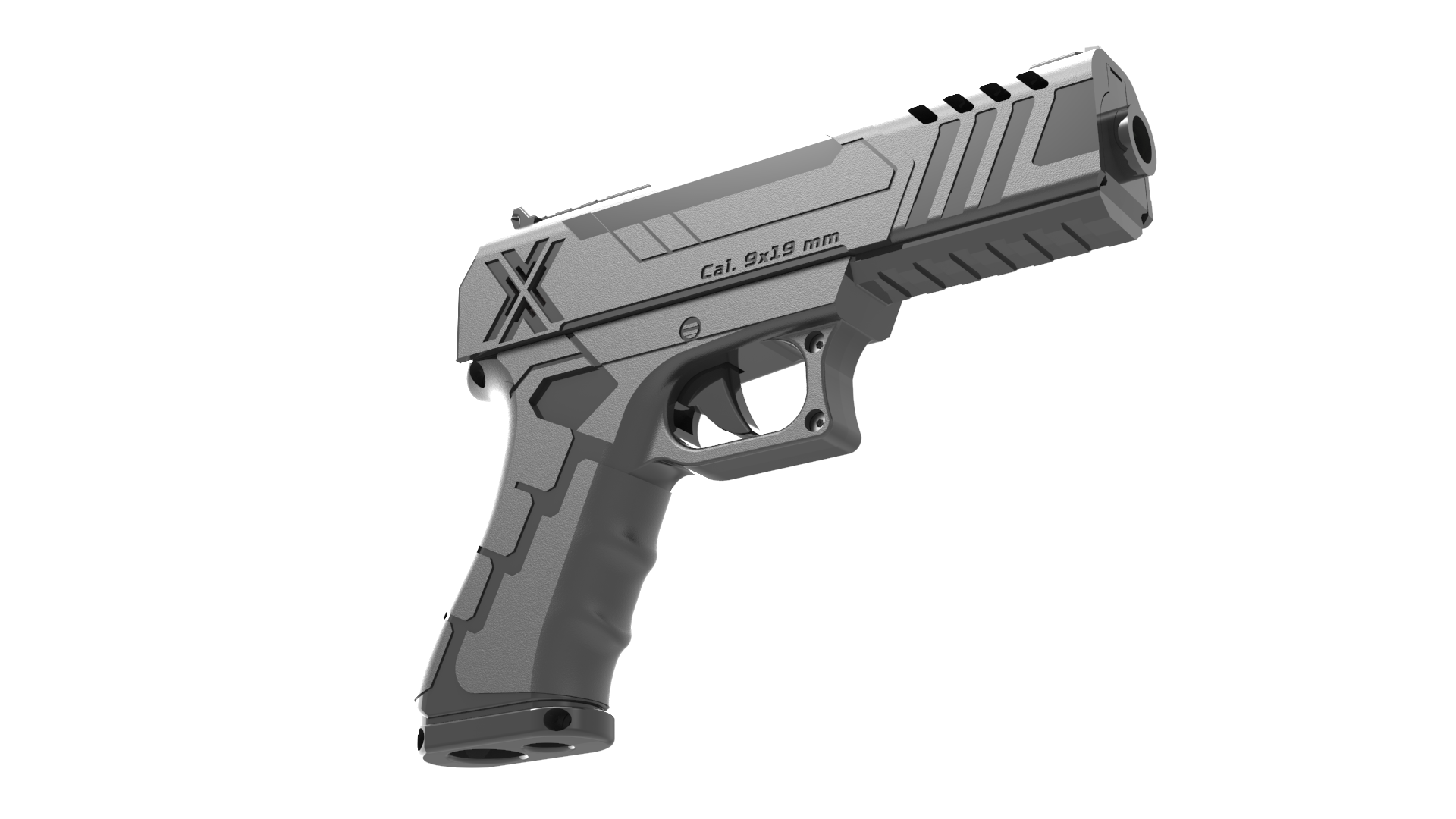 A further customer-facing step is the bolt reloading, which adds to the realism of the laser tag gun.

What else makes the Hornet stand out from its fellow weapons? This is the only pistol model that has a built-in Parallax optics. With it, it is capable of hitting a target at a distance of up to 100 meters. In addition, so far only the Hornet works with the 11th generation Alphatag electronics.